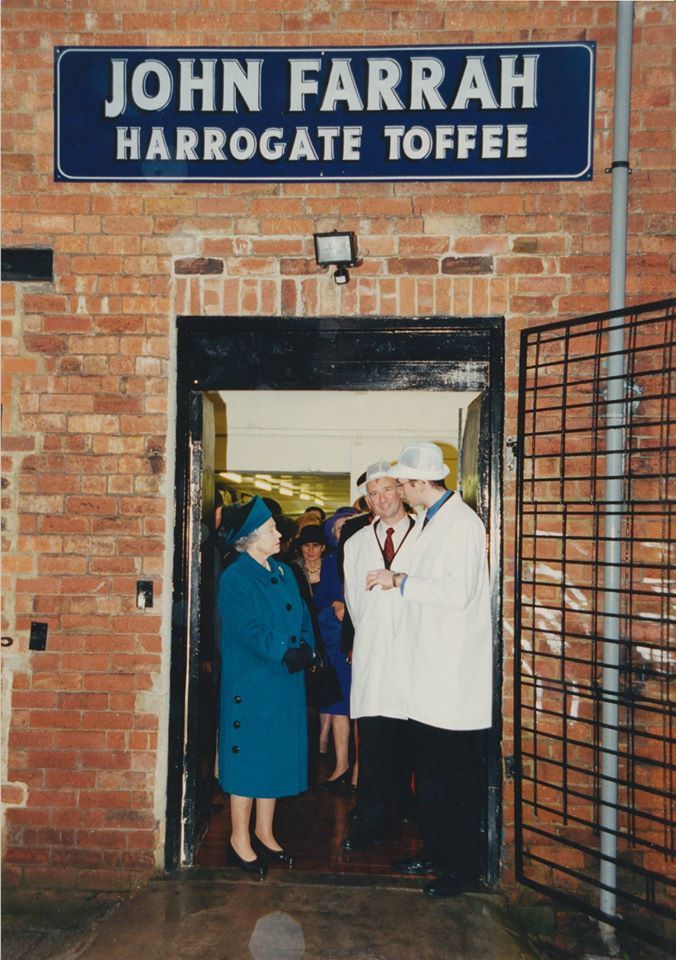 10 days of national mourning in the U.K. ended with the Queen's funeral

Hello again!   The Harrogate Lifestyle team are all back following the national 10-day mourning period, but we’re easing back into day-to-day life and reflecting on some of the Queen's influences and visits to Harrogate.

Our collective thoughts have been and still are very much with The Royal Family at this time as the country and the world has come together to remember Queen Elizabeth II.
Queen Elizabeth has been a reassuring constant throughout our lives, and we pay tribute to her unwavering service as the longest-reigning monarch in British history.
Many people in the Harrogate district chose to watch the funeral of the Queen on Monday 19th September at their homes, but there was a public screening for those who preferred to experience the occasion in the presence of others at the Royal Hall in Harrogate where the flag was lowered to half mast. 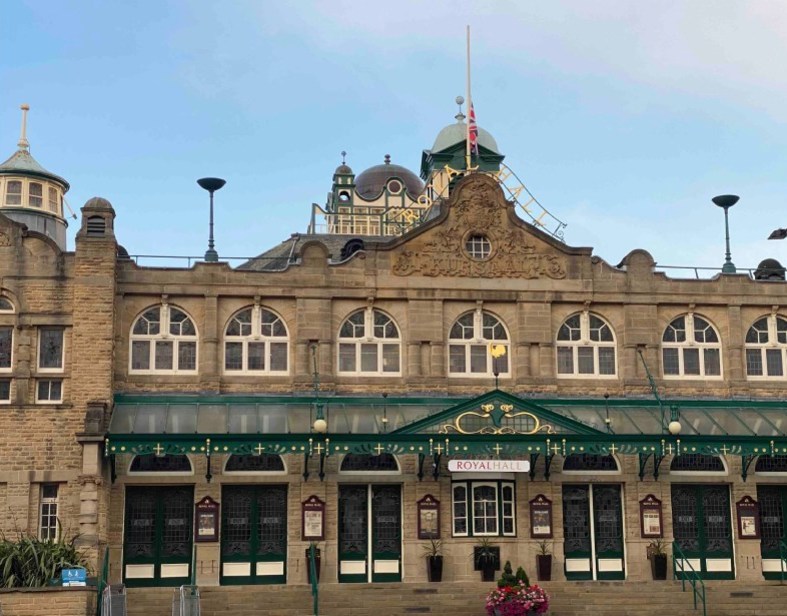 Nearly 1,000 people were expected to pack the town's most historic venue on Monday to watch the momentous proceedings on a giant screen in the Royal Hall which is a venue the new king, Charles III had a hand in restoring.
The official period of national mourning following the death of the Queen after 70 years as out monarch is now over. 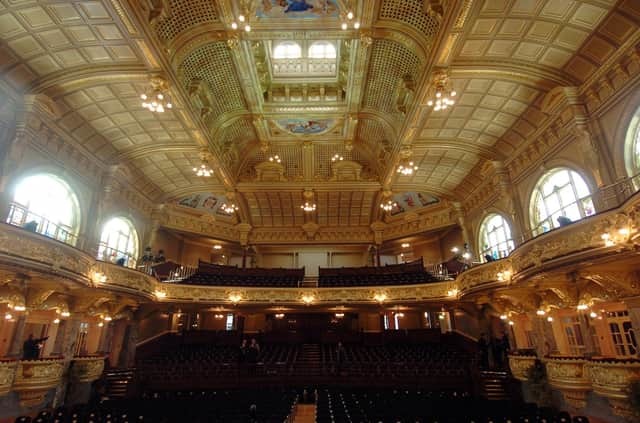 The Queen was a regular visitor to the Harrogate district throughout her reign as our nation’s longest serving monarch.

We recently read in the Harrogate Advertiser that the Queen was...
"a keen supporter of rural industry - she was Patron of the Yorkshire Agricultural Society between 1952 and 1997 - Her Majesty visited the Great Yorkshire Show in Harrogate on four occasions - 1949 (HRH Princess Elizabeth), 1957, 1977 and finally in 2008.
But it was not only for the Great Yorkshire Show that she came to our district."
Yorkshire Agricultural Society, the organisation that runs The Great Yorkshire Show, has issued its own tribute to Elizabeth II. She had long standing links to the show and visited four times as Queen (1949, 1957, 1977 and 2008)...
“We are deeply saddened to hear of the death of Her Majesty The Queen and send our sincere condolences to the Royal Family at this sad time.
“The Royal Family and Her Majesty The Queen have been an integral part of the Society’s heritage since it first formed in 1837.
“The Queen was the first female Patron of the Society and remained so for 45 years from 1952 to 1997. TRH Prince of Wales has been the Society’s Patron since 1998.
“Her Majesty first visited the Great Yorkshire Show in 1949, before becoming Queen, and went on to visit a number of times over the years before a final visit in 2008 with The Duke of Edinburgh. During the visit, The Queen unveiled a plaque to mark the start of the construction of Fodder and the adjoining Yorkshire Agricultural Society offices.
“The Society is honoured to have had the privilege of The Queen supporting the work it does for agriculture as both our Patron and as our guest.” 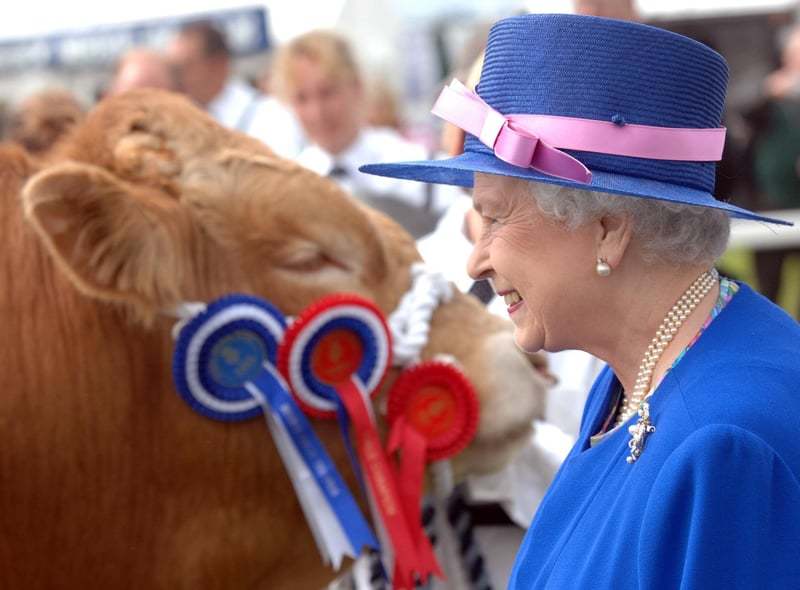 More from the Harrogate Advertiser...
"In 1985, The Queen accompanied the Mayor of Harrogate on a walkabout in Station Parade before visiting the ancient ruins of Fountains Abbey, near Ripon in the company of Lord Gibson, former chairman of the national Trust. She also visited Ripon Cathedral and handed out traditional Maundy Money to lines of recipients. They each received 59p - equal to the Queen's age." 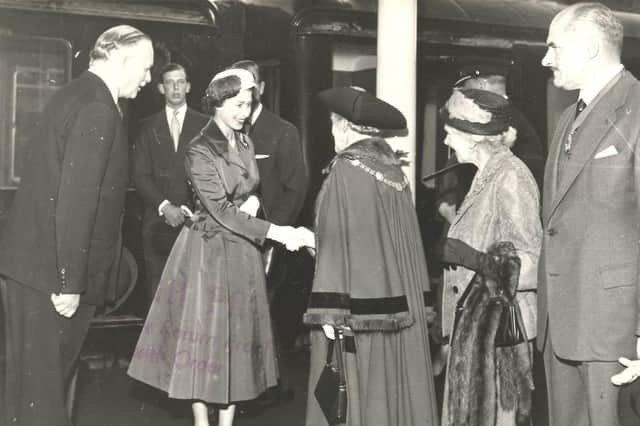 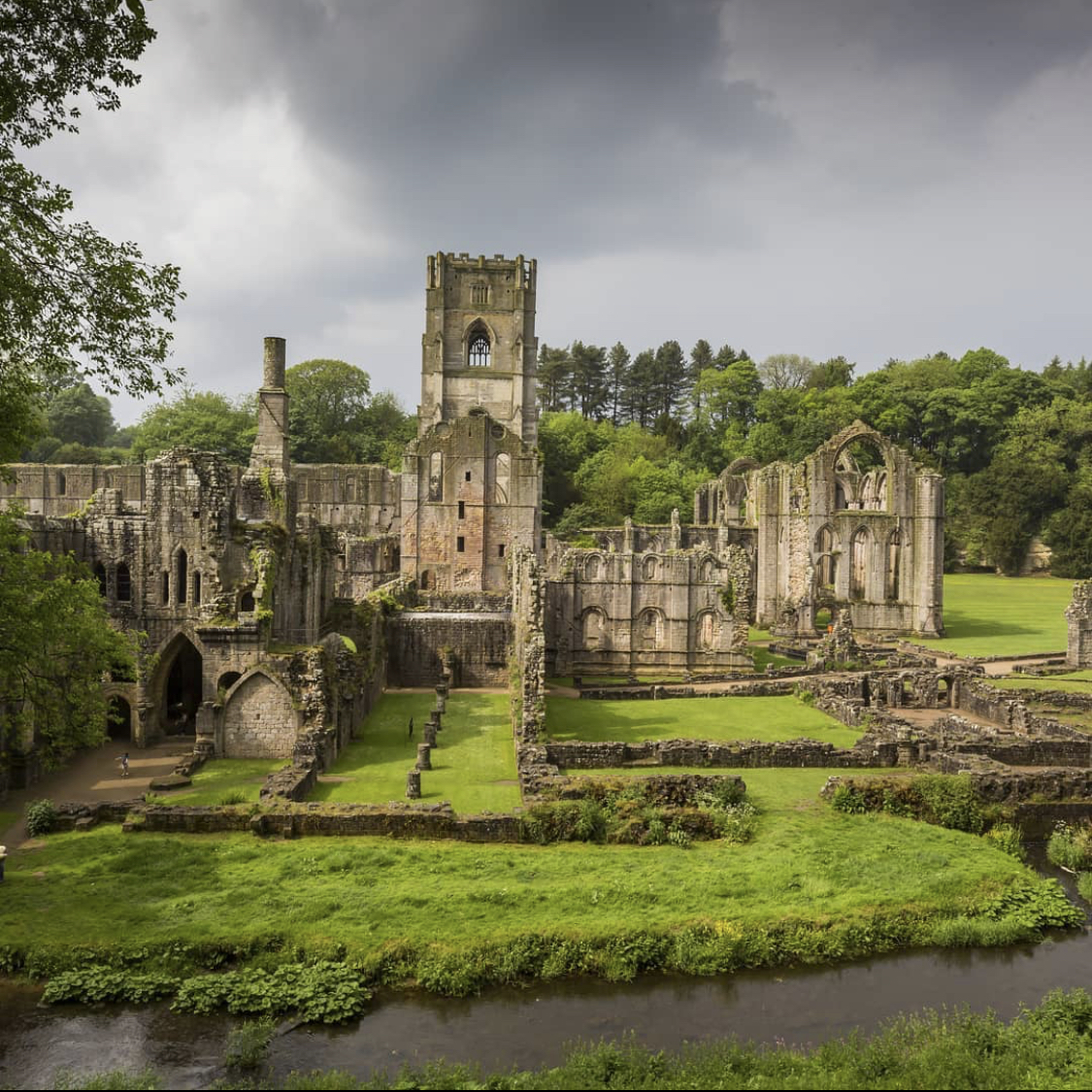 The Ripon Cathedral is a true sight to behold.
The announcemnet below comes from The Dean of Ripon, the Very Rev John Dobson DL...
“With the whole Cathedral Community, I was very sorry to hear of the death of Her Majesty Queen Elizabeth ll.
She was one of the world’s greatest figures of our time, one who dedicated her life as monarch to the wellbeing of the people of this nation, the commonwealth and the wider world.
She was a faithful Christian who drew on her faith to serve God and the common good in the role that God had given her. She wasn’t pious and didn’t let her exalted status unduly affect her. She reigned with great integrity, as seen in the images of her sitting alone at the funeral of her husband, the Duke of Edinburgh. She was a great servant of her people and an unequalled example of public service over the last century.
The nation and commonwealth have done well to celebrate her Platinum Jubilee with great warmth and sincere gratitude. Our Jubilee service on 2nd June was a golden moment in the life of the Cathedral which will remain in our memories for many years to come.
We commend Her late Majesty’s soul to God’s sure keeping and pray for comfort and grace for His Majesty King Charles III and the Royal Family.” 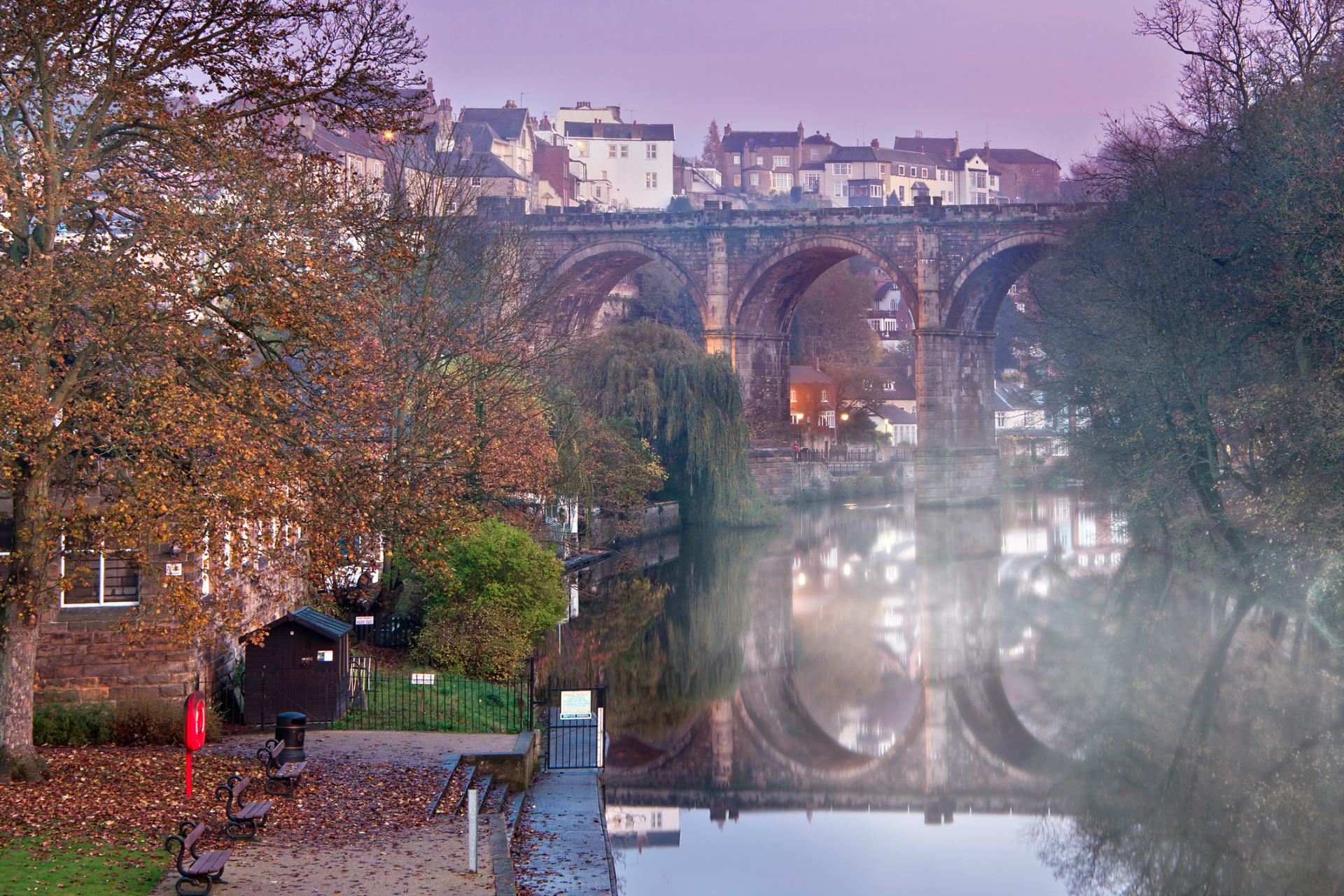 More from the Harrogate Advertiser...
"The Queen and the Duke of Edinburgh arrived together at Harrogate station in December 1998, with the Duke then making a separate trip to Knaresborough where he visited local electronics company GSPK and also had a pint and a chat with the regulars at Knaresborough Working Men’s Club."
Knaresborough is full of surprises, a warren of medieval streets and stone staircases that weave their way up and down the hill. The town centre is perched on the cliffs above the River Nidd and the imposing railway viaduct across the Nidd Gorge offers an amazing view to visitors as they arrive by train. 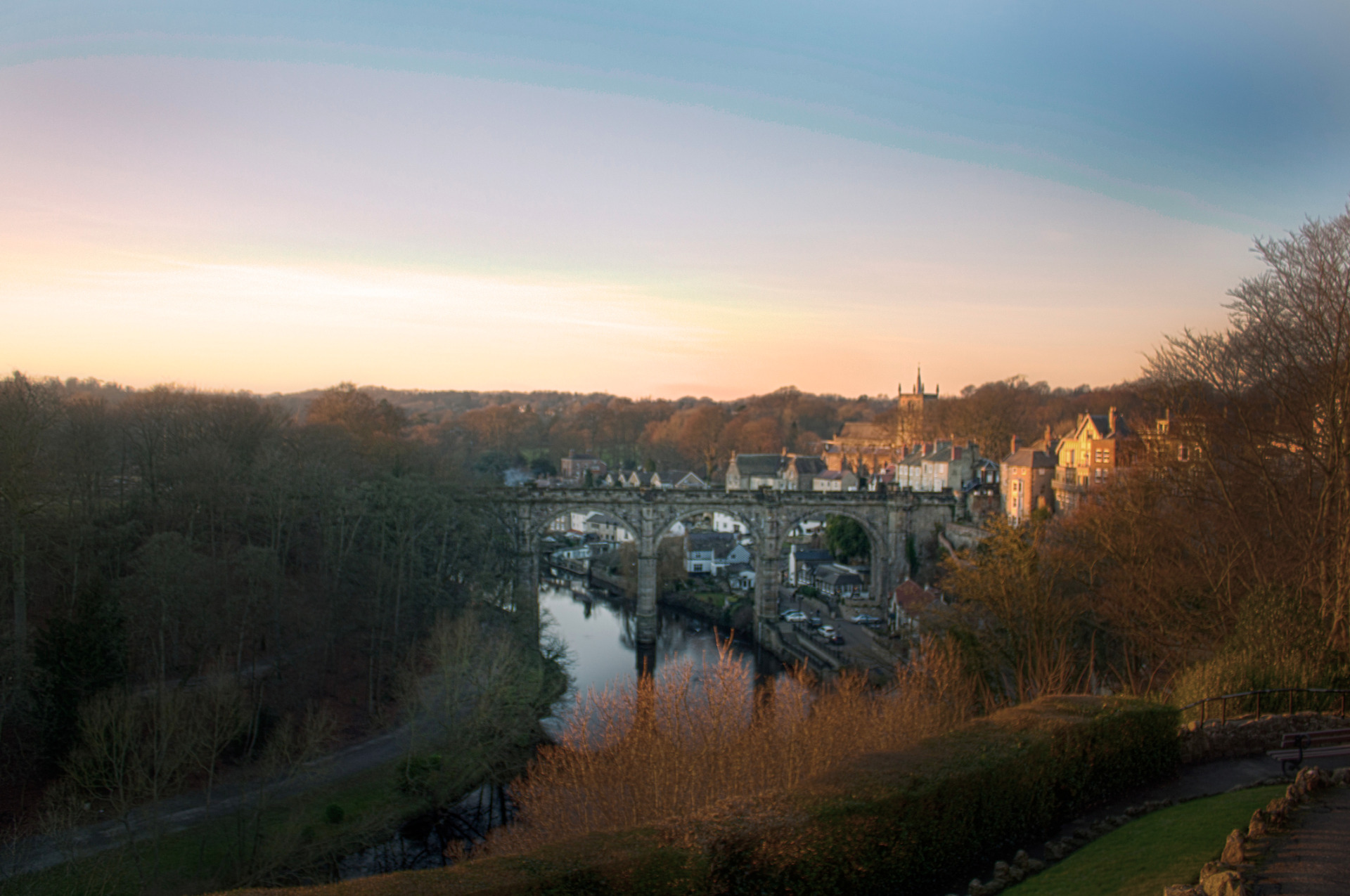 More from the Harrogate Advertiser...
"Her Majesty’s Harrogate visit was marked with a special tea dance in the Sun Pavilion in the Valley Gardens, which had just been fully restored after falling into disrepair.
She also visited the St Andrew’s police convalescence home, on Harlow Moor Road, to mark its centenary, and went on to Farrah’s toffee factory to see production of Harrogate’s famous toffee.
The Queen had apparently been sent a tin of Farrah’s and so enjoyed it that a visit was requested as part of her itinerary." 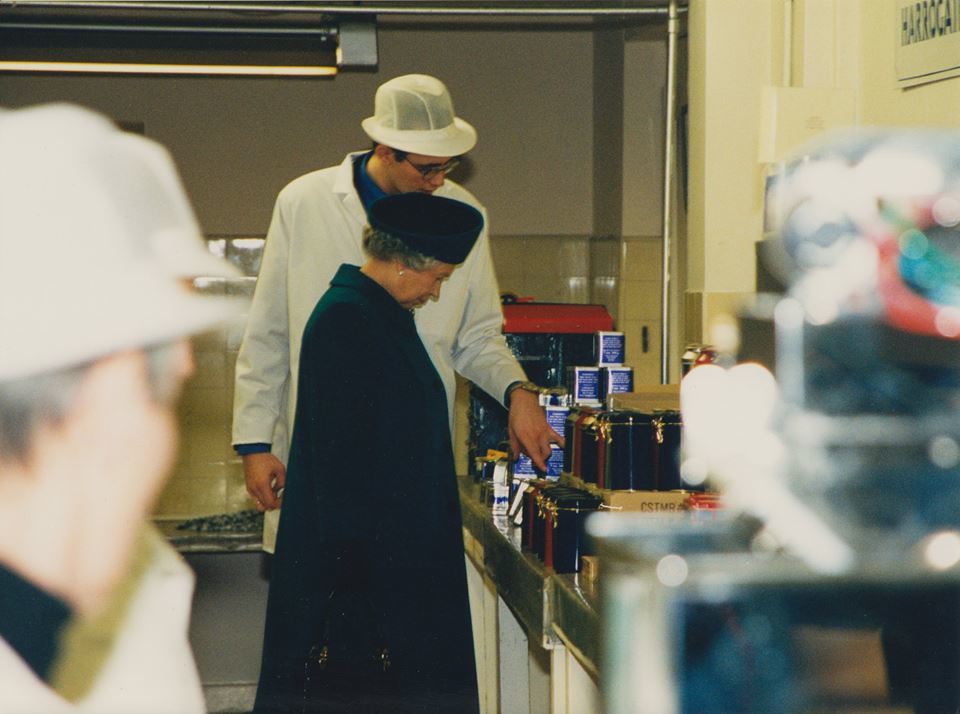 Farrah’s was established in 1840 by John Farrah in Harrogate, the beautiful spa town in the North of England. Their famous original Harrogate Toffee is still made in traditional copper pans and packaged in their distinctive embossed tins that are collectable the world over. The Queen visited their organisation in the 80's and we came across these images online so we thought we'd share them with you.
Farrah’s iconic Blue & Silver Harrogate Toffee Tin is recognized across the world. 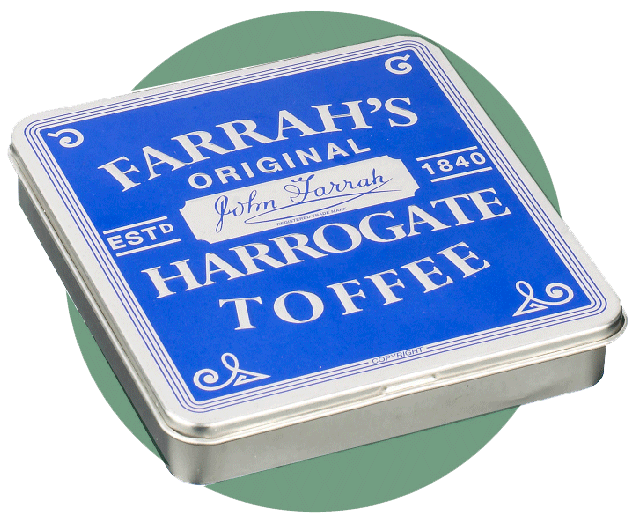 Olde Sweet Shop
The Fine Chocolate Shop at 31 Montpellier Parade sold chocolates from 1916 to 2004, and was renamed Farrah’s Fine Chocolate Shop in 1997.
In 2004 they moved 2 doors up the street to larger premises, The Olde Sweet Shop, 29 Montpellier Parade, Harrogate, HG1 2TG. Their sweet shop has one of the largest selections of traditional sweets in the country. Their chocolate counter is packed with English & Continental Chocolates. They are proud of the wide range of products they offer and are always looking for new and exciting products. It is well worth a visit during your stay in Harrogate. 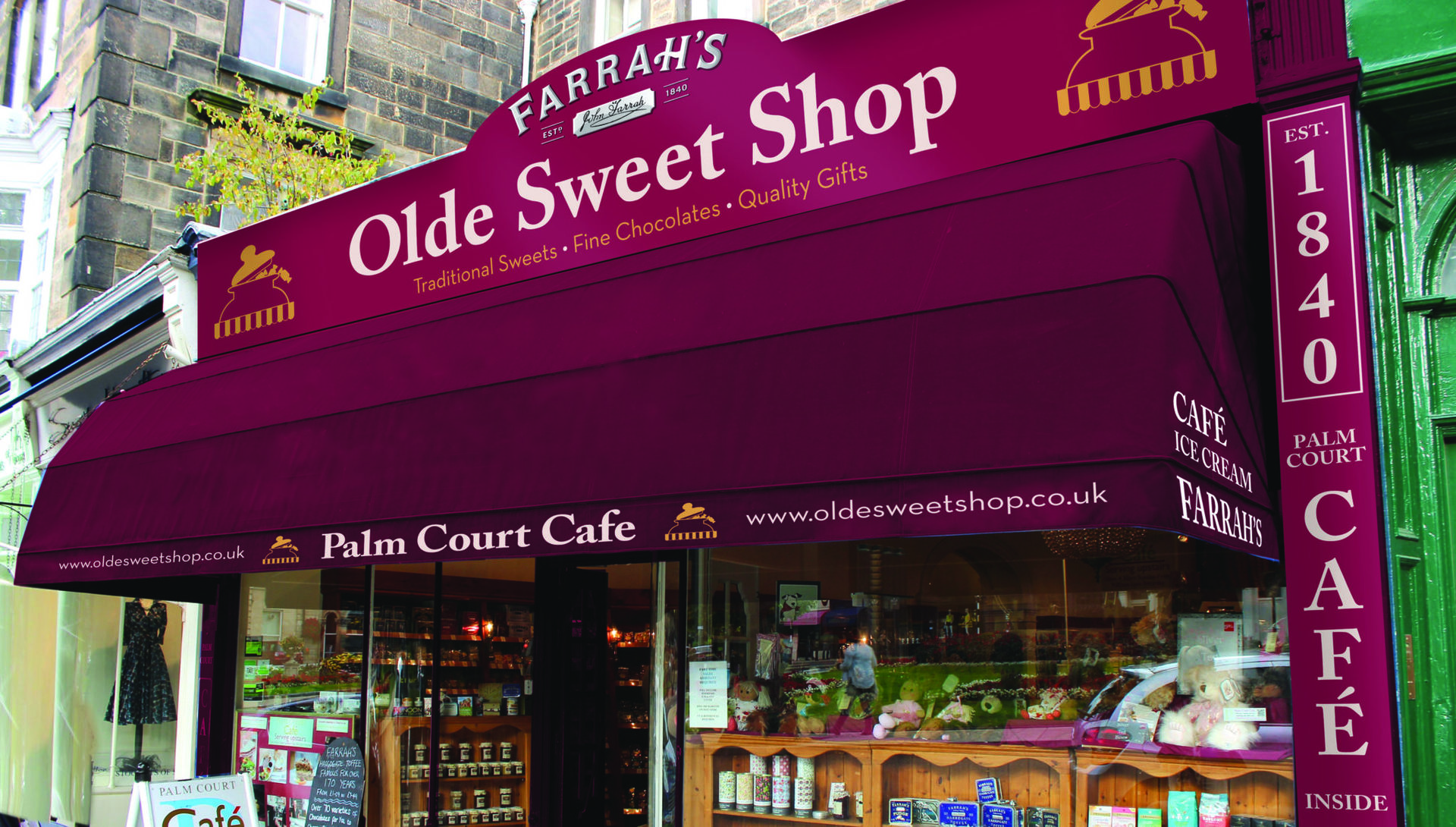 More from the Harrogate Advertiser ...
"During the visit she also opened the new Strayside Wing at Harrogate District Hospital, lunching with 20 members of staff, whose names had been drawn out of a hat.
She returned to the city in 2004 with a 20-minute walkabout in Ripon's market square. The Royal party were invited to the historic North Yorkshire town to mark the 400th anniversary of two Royal Charters granted by King James I.
The Queen and the Duke of Edinburgh chatted to local residents and received gifts and bouquets of flowers from an appreciative crowd of several hundred.
The Queen unveiled a plaque to mark the occasion and briefly appeared on the balcony of the town hall, where she waved to the crowd."
The Queen has no doubt left her mark for Harrogate district as well as the nation and the world. Our thoughts go out to the Royal Family, to all who knew the Queen and to all those who are going to miss her greatness.

The perfect alternative to a hotel in Harrogate is a stay at  Harrogate Lifestyle Luxury Serviced Apartments Book by phone 01423 568820, email info@harrogatelifestyleapartments.com or online via our website.